Fast Company has a short article by Adele Peters that describes some design features for the 99-story Pertamina Energy Tower that is planned for construction in Jakarta.
The building, designed by Skidmore, Owings & Merrill, will be the “first supertall tower in the world to generate its own power” apparently by capturing wind power at the top of the building and sucking geothermal from the bottom.  Excuse me if I am a bit skeptical. 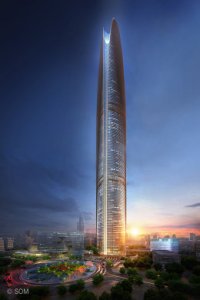 Flash back 15 years to a different architect — William McDonough — whose firm designed the Oberlin College’s Adam Joseph Lewis Center.  Bill is the standard bearer for architects that make fantastic claims backed up by little substance [Green guru gone wrong – Fast Company].  This success requires a media willing to publish such claims years before we ever see the fruit of the work.  When the fruit finally arrives — shriveled and disappointing — it matters little because the architect has moved on.

Consider Oberlin College’s Adam Joseph Lewis Environmental Center.  Long before its construction in 2000 McDonough was claiming he had designed a zero energy building — one that would be powered by solar cells mounted on its roof.  Through the years his claims never wavered.  Never mind that, following construction, the building consumed three times the energy his firm claimed it would [Early performance of a green academic building – ASHRAE] or that years later, after hundreds of thousands of dollars of HVAC modifications, it consumed double his initial projections — less than half the energy provided by its rooftop array.  Now, after 12 years of false claims the building has finally moved “into the black” powered by a $1,000,000 PV array constructed over a nearby parking lot which, combined with its $400,000 rooftop array, produces 3X as much energy as the the design team projected for the building.  [A paler shade of green – HPAC Mag]  I wonder how much attention McDonough would have gotten in 1998 had he told the world that he had designed, at a cost of $500/sf, a 14,000 sf building that used 20% less energy than conventional buildings and was to be powered by PV panels covering its roof and a parking lot, costing $1,400,000.  (That is an additional $100/sf just for the solar arrays.)  Excuse me Mr. McDonough — what was your “value added” — publicity?

But this post is about another project — the Pertamina Energy Tower.  My point is this.  Talk is cheap.  There is little doubt that this building will not deliver on its promises.  But for now the architects can spin their exciting story to media who don’t ask the hard questions — like “wouldn’t a shorter, fatter building be cheaper and use less energy? Or, “how much rental space is lost to provide space for the wind turbines and what is the cost/benefit of this?”  Physicists are good at “back of the envelope” calculations.  A 99-story building seems like an expensive way to mount a wind turbine.

4 thoughts on “Pertamina Energy Tower to generate all its energy — really?”