According to an article in HPAC Magazine Chicago Mayor Rahm Emanuel announced that Chicago had “reduced its carbon emissions by eleven percent from 2005 to 2015, bringing the city to forty percent of the way to meeting its Paris Climate
Agreement goals.”

What bullshit!  The same claim can be made by essentially every city in the United States (some more, some less).  This reduction has nothing to do with any unique accomplishments in Chicago — it is due to the simple fact that GHG emissions for the entire US from 2005 to 2015 went down by 11%.  All boats rise with the tide or, in this case, recede.

The main reason for this national GHG reduction is the fact that over the last decade cheap, fracked natural gas has replaced vast amounts of coal in the electric power sector.  This single change is responsible for the majority of the reduction in US greenhouse gas emission this last decade.  It isn’t energy efficiency, green buildings, renewable energy, or conservation — it is the economic impact of cheap natural gas and the increased cost of coal power due to EPA regulations.

Below is a graph lifted from an EPA report showing total US GHG emissions from 1990 through 2014.  The last bar for 2015 (black) was added by me using data pulled from another article.  The blue bars in this graph shows emissions associated with the electric power sector. 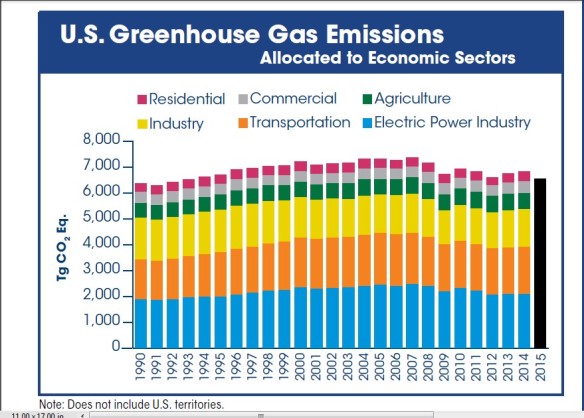 Rahm Emanuel’s claim is true but meaningless — just a lot of hot air emanating from the Windy City.

Professor of Physics at Oberlin College. I was originally trained as a condensed matter experimentalist. In the last 15 years my research has focused on photovoltaic devices, PV arrays, wind energy, energy efficiency, and energy use in buildings.