I receive occasional newsletters from HVAC consultant Larry Spielvogel concerning building energy and the HVAC industry.  Yesterday he sent out a link to an editorial that appeared in Crains New York Business concerning a recent ordinance passed in New York City that “forces large buildings to post letter grades reflecting their energy use.”  These grades will apparently be based upon a building’s Energy Star score.

The Crains’ editor is aghast that a fine building like One World Trade Center which is LEED-gold certified, receives only a B grade.  Worse yet, the highly-acclaimed, LEED-platinum One Bryant Park building receives a C grade.  In closing the essay the editor writes, “Slapping a C next to a LEED Platinum rating will discredit both metrics, confuse the public and accomplish nothing.” 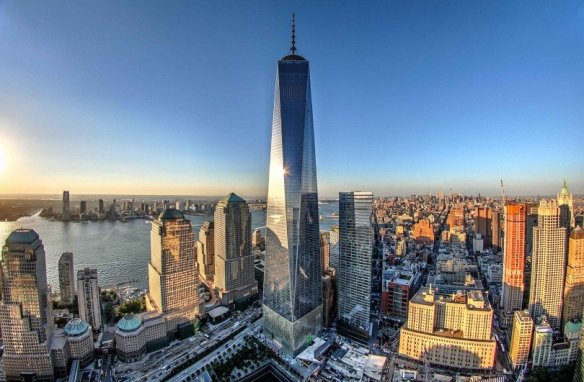 He is right on the first two counts but wrong on the third.  This will accomplish something very important, it will further the cause of truth!

It is better that the public be confused by the truth than to be told lies that bring clarity.  Confusion may lead to investigation and resolution.  The City’s new grade is based on the EPA’s building Energy Star score.  As I have shown in multiple venues, this score is largely garbage.  (See, for instance, earlier blogs from 2016-11-21, 2016-12-14, 2015-09-19, or 2014-08-22.)  The scoring system is mostly ad hoc, made up by non-engineers with a political agenda.  Armed with the knowledge acquired in a semester college statistics course they have developed scores that lack basis in building science or engineering .  They mean well — they want to help the environment.  Their approach is to condense building energy efficiency into a single metric that masses can understand and they can control.  But the score is largely meaningless and the DOE building scientists who helped develop the score 15 years ago have long since distanced themselves from this runaway system that lost its connection with reality.

The excessive energy used by One Bryant Park (aka The Bank of America Building) has been discussed before.  (See my earlier post and the New Republic article by Sam Roudman.)  For 2016, One Bryant Park had an annual site energy intensity of 211 kBtu/sf, more than twice that of the average NYC office building for 2015 (94 kBtu/sf). (For 2015 its energy use was somehow omitted from NYC’s public disclosure.)  The energy use of One World Trade Center (aka The Freedom Tower) has not appeared in the 2014, 2015, or 2016 NYC disclosures, despite the fact that the building opened in November 2014.  No doubt the Port Authority keeps its energy use secret as a matter of national security.

Nature does not care what awards these buildings have won or the clever technologies their owners have employed.  Nature only cares about total GHG emission and fossil fuel consumption and, by these measures, these buildings are not exemplary.

No doubt these building owners believe they are not responsible for the excessive energy use — it is their tenants.  True or not, it does not matter.  The building and its occupants are judged together.  If the owner is embarrassed — find different tenants.